Memorabilia from the First World War 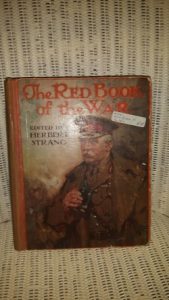 Interest in the history of the First World War remains strong as we approach the centenary of the end of hostilities.

Here we have a volume entitled The Red Book of the War, edited by Herbert Strang and published by Hodder & Stoughton.

What makes it unusual is that it was clearly produced before the end of the conflict – a dedication inside is dated ‘1916’. Clearly aimed at boys, it features a portrait of Field Marshal Sir John French – Commander-in-Chief of the British Expeditionary Force for the first year and a half of the war – on the cover. 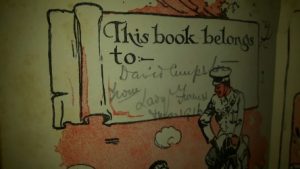 Charting successes and failures to date, it contains all manner of jingoistic propaganda (“they will learn in the hard school of adversity that Germany is not the last word in civilisation”). A fascinating piece of history – and just £8! 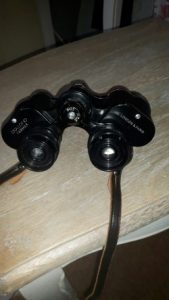 Elsewhere in The Emporium are these vintage binoculars bearing the famous ‘Dollond’ name.

Priced at just £28, they come complete with leather neck strap and case.

Sometimes dirt and mould can accumulate inside older field glasses but these still produce a nice clear image. ‘8×25’ indicates that the binoculars have 8x magnification and a 25mm objective lens diameter. 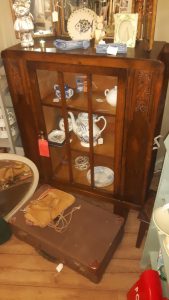 Within Sally’s section is this attractive 1930s display cabinet which has been reduced from £60 to just £35.

The blue and white teapot inside (£8) is by J & G Meakin and features the company’s ‘Blue Nordic’ pattern. J & G Meakin became part of the Wedgwood Group in the 1970s.

The lovely old suitcase in the foreground is £15. 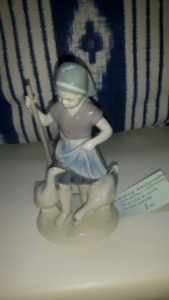 Still with ceramics, we have this charming porcelain figure of a girl tending to her geese.

It was made in Ilmenau in the former East Germany during the early 1970s and is yours for just £10. 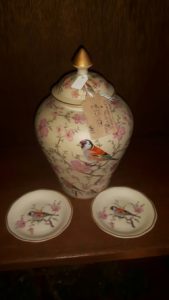 Made in Aveiro, Portugal, each piece features the ‘Ceramica IBIS’ stamp. 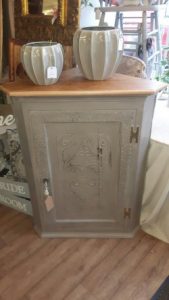 Also within Jacqui’s section is this attractive and very useful shabby chic corner cupboard, priced £145, and well as a pair of vases (£10 and £20). 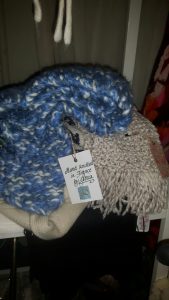 If you are looking for something with a real personal touch, what about a hand-knitted scarf by Gloria? She has items from as little as £5 while this lovely blue and white piece is just £8.