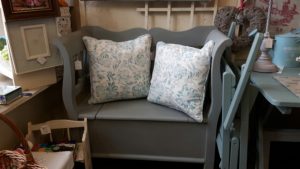 Cecilia is selling this beautiful settle for £135. Painted in light blue/grey, it features a handy storage box underneath the seat and would look great in a kitchen or conservatory. 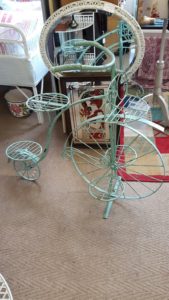 Elsewhere in Cecilia’s section is this eyecatching bicycle planter (£65). 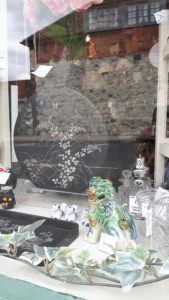 Pod has an Oriental flavour to her window, the highlight of which is a striking papier mache vase. At just £8, it would make a fantastic talking point. 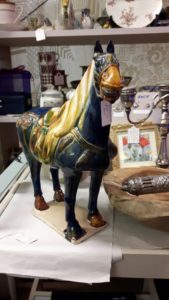 Continuing the Eastern theme, Pat is displaying this glazed ceramic horse figure. Although it has no great age, it’s highly decorative and yours for £28. 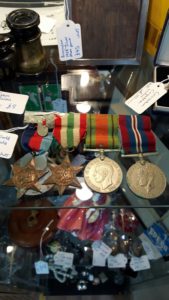 John is selling this swing-mounted group of four Second World War medals (£45). On the far left is the 1939-45 Star. This was awarded to British and Commonwealth personnel who completed at least six months’ service overseas. Next is the Italy Star which means this recipient probably took part in actions on land in Italy at some point between 1943 and 1945.

These two medals are followed by the Defence Medal, the ribbon of which comprises two green stripes (representing ‘this green and pleasant land’), two narrow black lines (the black-out) and a central orange band (fire-bombing). Finally, we have the War Medal 1939-45 which was awarded to those in the armed forces who had served for at least 28 days between 3 September 1939 and 2 September 1945.