The pair scoured the shop for items to sell at auction and came away with a couple of beautiful objects. To find out what they were and whether they made a profit, you’ll have to tune into BBC2 at some point in the near future – watch this space for details! 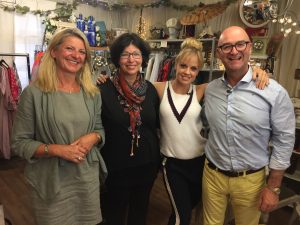 Joanne, who won the popular television dancing competition with partner Ore Oduba in 2016, announced recently that she will be appearing in the touring production of Flashdance The Musical. The show visits Wimbledon and Dartford in October and Tunbridge Wells in December – to find out more, see flashdanceuktour.co.uk.

Meanwhile, the Emporium is delighted to report that Julie Bond is branching out into a larger section of the shop (on the right-hand side). Julie specialises in art and curios (she is a fine artist in her own right – see julie-bond.com for details of her exhibition, Emotive, at Denbies at the end of August).

If you go to the Godstone Fete on Monday 28 August, look out for the Emporium-sponsored nag in one of the donkey races! Other attractions at this year’s event include a Punch & Judy show and a traditional Dutch street organ (named ‘Tulip’) that spent many years playing on the streets of Leiden. 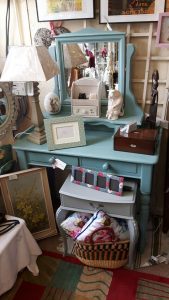 As usual, Cecilia’s section is filled with beautiful objects.

On top of the blue dressing table (£160) is a lovely wooden box featuring mother of pearl detailing – it’s yours for £34. The ethnic sculpture is just £16. 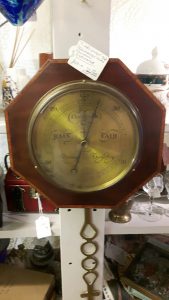 Elsewhere, this aneroid barometer is £48. Made by Aitchison, it has an unusual octagonal-shaped case and features attractive scrolled text on the brass register plate.

Contrary to popular belief, aneroid barometers do not contain mercury. Small changes in air pressure cause a small flexible metal box (an aneroid cell) inside to expand or contract, which in turn engages a spring and mechanical levers which drive the needle on the face. Tap the case and the needle will rise or fall – a move to the right indicates rising air pressure and – hopefully – better weather! 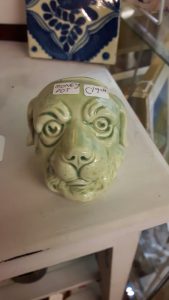 What about a money pot sculpted in the shape of a dog’s head?

Dating from the 19th century it has a light-green glaze finish; the coin slot is just out of view. Measuring only about three inches in height, this highly unusual item is yours for £30. 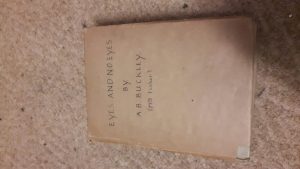 Book lovers may be interested in this charming copy of Eyes and No Eyes by Arabella B Buckley, printed by Cassell and Company in 1903. Someone has taken the trouble to cover it in brown paper, and inside you will find a handwritten dedication to one ‘Una R Webb’ in Christmas 1911. 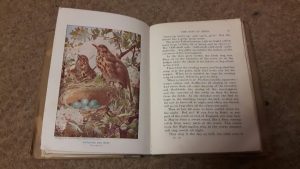 A treasured gift no doubt. Also known as ‘Mrs Fisher’, Buckley wrote numerous other books on science and natural history for children, including The Fairy-Land of Science and By Pond and River. She died in 1929, aged 88. The price of this fascinating little volume is just £6.